I always find it interesting when there are tobacco or other cards that have been used to advertise other products in other fields.  Case in point was a recent card I was told about by current 2017 Vintage Nonsportsman of the Year Marty Krim.

The N427 American Eagle actress set is a sepia colored lithographed set likely issued in the late 1880’s to 1890’s.  A subject card is illustrated below: 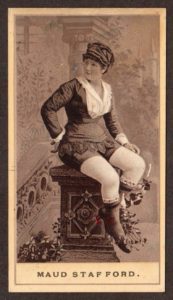 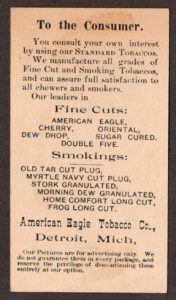 Similar photography and stock was used for the Purity Cough Drop product and Purity Chewing Gum from the J. Falke company of St. Louis, Missouri.  Some quick research put J. Falke gum production in the 1890 time frame, so the cards were likely issued in a similar time frame as the N427 American Eagle Cards.  Lithographers created these base stock cards to use for multiple manufacturers of goods in many categories and sold them whenever and wherever they could.  The similar-looking J. Falke Purity Chewing Gum card is pictured below: 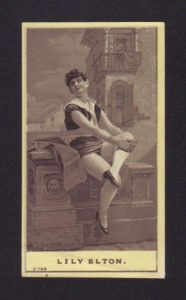 The one difference I can note is that the stock number “C-729” is on the front of these cards in the lower left.  In many cases, these numbers were used to Identify the stock number for this particular type of cards.  It is not, however, used on the N427 American Eagle Cards.  The checklist for the N427 set numbers some 23 cards as outlined in American Tobacco Cards by Mitchell and Forbes.  They note a dozen cards are captioned with the actress name and eleven are uncaptioned.  The captioned cards include both the Purity example above of Lily Elton and the N427 American Eagle example of Maud Stafford.  In addition to those two subjects, the set also includes Lena Campbell, Mollie Fuller, Sophie Hummel, Lillian Russell, Van Oastan, Flora Walch, Carrie Wallace, Mlle, Weber Lizzie Winner and another subject that was in too poor of condition to name the subject although it was captioned.

Stay tuned for other examples from other well-known sets that fall into this “often used” category….