The Kinney Military (N224) set is one of the most popular tobacco sets of all time.  Totaling a staggering 622 cards, it was issued over a period of time in 13 different series, some of which are extremely difficult to obtain.  The set was advertised in a number of ways–banner/poster, die cut soldier pieces and trade cards.

These Die Cut pieces measure 14-15 inches tall by about 4 inches wide.  The two on the outside have both front and back printing while the one in the middle has a blank back.  The piece on the right is significantly thicker than the other two pieces.  Die Cut advertising was extremely popular during the late 1880’s and pieces of such size were often used as point-of-sale advertisements or window advertisements in Cigar/Cigarette/Tobacco shops of the day. 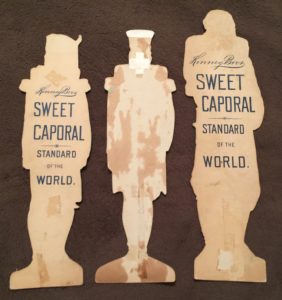 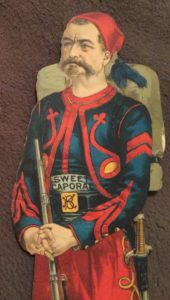 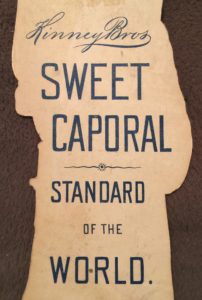